Post-traumatic stress disorder (PTSD) is a mental health condition that can develop in people after they witness or experience a traumatic life incident or event such as a natural disaster, sexual assault, combat situations, or a tragic accident. 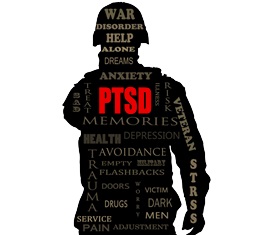 For some people, symptoms of PTSD occur soon after the event. For others, symptoms may occur months or even years later. According to the United States Department of Veterans Affairs National Center for PTSD, nearly 8 percent of Americans will suffer from PTSD in their lifetime.

PTSD is fairly common in military personnel. During combat, veterans may be sent on missions that expose them to extreme, life-threatening events.

When a veteran experiences a traumatic event during her military service, she may exhibit some common stress reactions, including:

These symptoms fall into four general categories. However, veterans may not experience them in the same way. These categories are:

In 2010, the VA changed its eligibility requirements for veterans to receive disability benefits for PTSD. No longer do veterans have to provide proof of the event that caused their PTSD. This new rule is for combat soldiers as well as for any veterans who suffered fear of a hostile environment or terrorist activity.

To establish a service-connection to PTSD, a veteran must:

If you had PTSD prior to your military service, the VA won’t provide you with benefits as a service-connected condition. However, it’s possible you may be eligible if you can establish an “aggravated service connection.” To do this, you need to show your combat duty made your PTSD worse. Thus, it’s critical that your PTSD is noted in your entrance medical exam, or you’ll need to have solid medical evidence that shows you were diagnosed with and were being treated for PTSD before starting your military career.

If you believe you have service-connected PTSD, it’s beneficial to contact an experienced VA disability lawyer to help file your claim. Our attorneys are committed to helping veterans, and we'll examine your case, develop the best strategy, and work with you to submit a claim that increases your chances of receiving disability benefits. Contact our office today.