If You Suffer From PTSD, You’re at a Greater Risk for Migraines

Migraine headaches and post-traumatic stress disorder (PTSD) may seem to be two unrelated illnesses, but research shows that there is a connection between them, and often they have a comorbid relationship—when one condition exists simultaneously and independently of another condition. Although PTSD and headaches haven’t received the same kind of attention as other illnesses, researchers believe it makes sense that the two are connected.

PTSD is a condition that happens when a person experiences severe anxiety after a traumatic event or incident. The person may relive the incident over and over, try to avoid anything connected to the event, and may have difficulty sleeping. This stress and 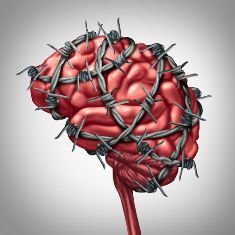 anxiety can produce migraines—a serious headache that can be accompanied by dizziness, nausea, and extreme sensitivity to light and sound.

If you suffer from PTSD, your risk is greater for other health problems, including heart disease, diabetes, and pain—20 to 30 percent of people who suffer with PTSD also report issues with pain. People who experience migraine headaches have often been exposed to a traumatic event, and approximately 17 percent have symptoms that are comparable with a diagnosis of PTSD.

Both the Iraq and Afghan Wars increased the occurrence of migraines in veterans—and this was especially true of soldiers after a one-year combat tour in Iraq. A study found that soldiers screened within 90 days of returning home experienced migraines two to four times more than civilians. And because the United States Department of Veterans Affairs (VA) recognizes migraines as a service connected disability, veterans may be eligible for disability benefits if they can prove their military service caused or aggravated their headaches.

The Relationship Between PTSD and Migraines

Veterans can suffer from migraine headaches for a variety of reasons, including PTSD or a traumatic brain injury (TBI), and these headaches can have a devastating impact on quality of life. Researchers aren’t certain why people who suffer from PTSD are more likely to experience migraines, but it’s believed that the symptoms of PTSD contribute to high stress levels and emotional tension and pressure. This stress can be a catalyst for these headaches. It is known, however, that a veteran or any person who suffers a TBI will likely experience headache problems. And because the brain reacts to trauma through pathways that are similar to those in migraines, these types of headaches can be a result of a TBI. Additionally, the link between a TBI and a migraine can be PTSD.

Researchers have found that veterans returning from “Operation Enduring Freedom” and “Operation Iraqi Freedom”—OEF and OIF—have demonstrated a high rate of TBIs that may be associated with the number of headaches being reported by these soldiers. About one-third of all injuries on these battlefields are to the neck and head—over 50 percent higher than in World War II, Vietnam, or Korea. One of the primary injuries from these wars is a TBI that comes from a sudden or an unexpected “blast.”

A mild TBI occurs when you lose consciousness for less than one hour, and this is the injury most often related to chronic PTSD headaches. Approximately, 20 percent of American soldiers who were deployed in Afghanistan and Iraq sustained a concussion during service. Of those who suffered a concussion, 37 percent experienced a post-traumatic headache—headaches that began one week after the impact to the brain.

With an increase in these roadside bombs and, subsequently, TBIs, the rate of veterans experiencing PTSD has soared. From 2003 to 2007, there was a growing number of newly diagnosed cases—specifically in soldiers from the Marines and the Army who were four times more likely to report PTSD due to their involvement in on-the-ground combat.

A study from the University of California, San Diego seems to substantiate this connection. The study suggests that veterans who were involved in combat in Iraq or Afghanistan and experienced injuries may suffer from persistent headaches. The study surveyed over 300 veterans who had suffered injuries and found they were at a higher risk of developing migraines. Concurrently, those who had developed PTSD had higher rates of tension headaches and migraines.

Because a TBI can seriously impact a veteran’s daily life, those veterans who suffered a TBI during combat were found to miss more days from work, require more medical visits, and report a general lack of good health and many other physical symptoms.

If you suffer from migraines that you believe are service related or are a result of service-related PTSD, you may qualify for benefits from the Veteran"s Administration. If your claim has been denied and you need assistance with an appeal we can help.Contact us at (402) 933-5405 for information.