How does the VA rate depression caused by my TBI?

A traumatic brain injury (TBI) is generally defined as a change in the way the brain functions due to some type of external force. For civilians, this external force can come from a fall, a car accident, an assault or attack, or some other event when the head strikes an object or an object strikes the head.

For those who serve in the military, TBIs are most often the result of an improvised explosive device (IED), grenade, mortar, mine, or bullet.

What Happens After a TBI? 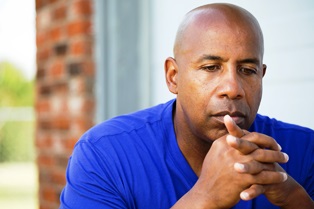 After a person suffers a TBI, amnesia is common for some period of time—for a few minutes up to weeks. The patient may have difficulty remembering what happened just before and after the brain injury.

For veterans, they may have no memory of the circumstances prior to or following an IED explosion.

TBIs became known as the “signature wound” of Afghanistan Operation Enduring Freedom (OEF) and Operation Iraqi Freedom (OIF) because there were
so many explosion-related concussions during combat in these two wars.

Depression is a common mental health condition and one that frequently affects military service members. A recent study found that the risk for suicide is most prevalent in younger veterans, and approximately 10 percent of those treated by the VA between 2009 and 2013 suffered from major depressive disorder.

The VA changed its regulations on secondary service connections in 2013 to add a connection between a TBI and certain conditions, including depression. The new regulation states that the veteran’s depression is presumed to be a secondary condition of a TBI if:

It’s very common for veterans to develop depression after some type of service-related physical illness or injury. If there's evidence of a physical disability connected to military duty, it’s possible for a veteran to apply for increased compensation for depression as a secondary service connection. In order to establish this secondary connection, you must have:

The VA rates a veteran’s depression using the following six percentage levels to determine if he’s eligible for benefits:

If you’re a veteran suffering from depression due to a TBI, theVA disability attorneys at Cuddigan Law can help you better understand if your condition meets the requirements under which depression claims are evaluated and approved. We’ll work with you to help ensure the best possible chance for getting an approved claim for depression as a secondary condition. Call us today at (402) 933-5405 or send us an email for a free evaluation of your situation.