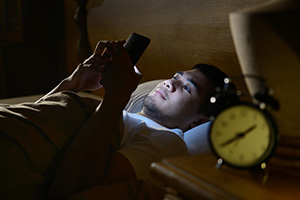 Phobos was the Greek god of fear and it is from that name that we get the word phobia—a strong, irrational fear of something that in reality poses very little danger or even none at all.

The ancient Greeks never suffered from nomophobia. It is a very modern fear. A condensation of “no-mobile phone phobia”, nomophobia is a fear people have of being left without their phones which causes anxiety, panic, and even—in some reported cases—fainting.  We’ve all had that nervous moment when we think we’ve lost our phone or accidently left it behind at the gym or a restaurant, but if your apprehension rises to a panic level, you may be nomophobic.

Symptoms of nomophobia can include:

The jury is still out among psychology professionals as to whether or not no mobile phone is a real phobia or not but Psychology Today maintains that two-thirds of adults have symptoms of nomophobia. (And that number is probably higher among teens.)  So, what do you think? Do you believe nomophobia is real? Do you know people who are that attached to their cell phones? Are you?