Alcoholism, also referred to as alcohol use disorder (AUD), is the unhealthy, uncontrolled drinking of alcohol due to an emotional and/or physical dependence on it. Approximately 88,000 people die from alcohol-related causes each year. While alcoholism is a severe problem in the U.S., it's especially difficult for veterans who show higher rates of this medical condition than the general population. 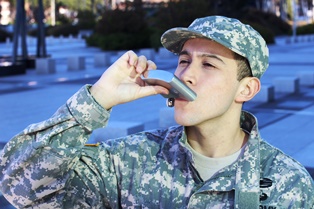 Military personnel face unique situations that create stressors which can increase their risk of binge drinking or heavy drinking. They also frequently experience  events that can lead to post-traumatic stress disorder (PTSD). In addition, statistics indicate individuals who engage in combat are at a higher risk for AUD.

Veterans who struggle with alcohol-related issues may need treatment if they experience any two of the following during a one-year time period:

The Military Culture of Alcohol Abuse

Many service personnel who are on active duty see drinking as part of the military culture. It's used as a way to connect with other service members, and many bars, pubs, and food establishments offer alcohol to soldiers at reduced prices. According to a 2015 report on health-related behaviors, over five percent of military members across all branches of service are heavy drinkers, and one out of three are binge drinkers. Binge drinking seems to be more prevalent in those who have had greater exposure to combat.

Likewise, another study showed that those who returned from deployment as part of an infantry team misused alcohol, and approximately 25 percent continued to misuse it three–to–four months after their deployment. Additionally, the United States Department of Veterans Affairs (VA) reports that "1 in 10 veterans deployed to Afghanistan or Iraq are diagnosed with drug or alcohol abuse."

Some veterans use alcohol as a coping mechanism. For many, it's a way to forget trauma, deal with anxiety and stress, handle flashbacks of terrifying events during service, and manage negative feelings associated with PTSD. Because AUD can increase depression and thoughts of suicide, it can damage a veteran's relationship with others. This is one of the reasons why the VA established the VetChange confidential help app as part of its National Center for PTSD.

Additionally, some veterans eventually become homeless because adjusting to life state-side after experiencing military combat can be a challenge. And this homelessness can exacerbate alcoholic problems. In 2016, approximately 11 percent of homeless adults were veterans, and most of these veterans suffer from AUD.

Veterans can receive VA disability benefits for alcohol-related conditions that are service-connected to their time in the military. However, alcoholism can't be a result of their own "willful misconduct." Because most medical professionals believe that mental illness and substance abuse are linked, if you can connect your mental illness, such as PTSD, to your time in service, you may qualify for VA disability benefits.

At Cuddigan Law, we understand that veterans who suffer from PTSD can face many types of other medical conditions, including alcohol use disorder. Our attorneys have supported veterans for years, and we can help you if you need VA disability benefits following a diagnosis of PTSD or any other health condition. Contact us today, and you'll speak to an intake specialist for free.