As a veteran, why am I at risk for alcohol abuse?

It’s not easy for military personnel to return to a normal life after being deployed—especially if soldiers experience trauma while in service. This can lead to the development of post-traumatic stress disorder (PTSD), which can lead to alcohol abuse.

Why Veterans Have a Greater Risk for Alcohol Abuse 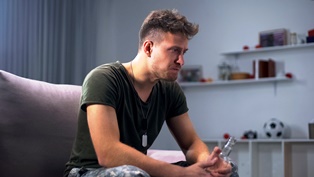 Because service members face a variety of difficult challenges, including the constant risk of injury, being away from home for long stretches of time, and the uncertainty and unpredictability of their deployment, they sometimes use alcohol as a way to cope.

Over the last 30 years, alcoholism, also known as alcohol use disorder (AUD), has become a major problem for military personnel.

The United States Department of Veterans Affairs (VA) reports that any traumatic event, especially stressful combat situations and terror attacks, can lead to PTSD. Sometimes this mental health condition occurs immediately following the event—sometimes, it can develop months or years later. Some veterans try to cope with the symptoms of their PTSD by using alcohol. According to the VA, approximately 27 percent of veterans who are diagnosed with PTSD also suffer from a substance abuse disorder (SUD).

While there are many other contributing factors that may cause someone to develop AUD or SUD, having a co-occurring disorder such as PTSD increases the likelihood.

Understanding the Connection Between Alcoholism and PTSD

PTSD was once called “battle fatigue” or “shellshock.” However, it's often caused when a soldier witnesses warfare, explosions, or tragic, terrifying, and/or traumatic events. PTSD can also develop after sexual abuse. Approximately 23 percent of female veterans report being sexually assaulted while they were in service. Veterans often use alcohol to forget the horrific incident that happened to them or that they witnessed. It’s a method to protect themselves from the triggers of that event, reminders of what they’ve seen, and a way to self-medicate and numb the pain they feel.

Drinking has become an inherent part of the military culture. Because using illegal drugs in the military can mean a dishonorable discharge, many service members use alcohol as a way to handle the challenges they face during active duty and upon returning home. It's one of the reasons why the VA established the VetChange confidential help app as part of its National Center for PTSD.

At Cuddigan Law, we understand that veterans may abuse alcohol after developing PTSD. We also know that PTSD is a debilitating mental condition that can severely and negatively impact your life. Our attorneys have been supporting veterans for years, and we’ll carefully examine your case and advise you on how best to move forward. If you’d like a free evaluation of your disability case, call Cuddigan Law, and speak to an intake specialist for free.