What causes Crohn’s disease, and how is it treated? 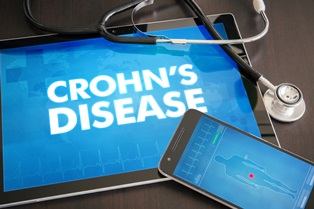 Crohn’s disease is a condition that can affect any portion of the GI tract and is characterized by inflammation of the bowel. Patients who suffer from Crohn’s disease can experience mild to severe symptoms including cramping and abdominal pain, fever, appetite loss, rectal bleeding, and ongoing diarrhea. Complications from these symptoms can include abscesses and intestinal blockages.

The Social Security Administration (SSA) recognizes Crohn’s disease in its Blue Book listing of impairments in the Digestive System section, under Inflammatory bowel disease (IBD) 5.06. But although Crohn’s is a disorder eligible for disability, getting a claim approved for this disease can be a challenge. It can be helpful to hire a Social Security (SS) disability lawyer to take you through the claims process and advocate on your behalf.

Researchers don't fully understand the causes of Crohn’s. It’s believed that stress and a patient’s diet can provoke and irritate the condition, but neither causes the disease. Current research indicates that contributing factors may include:

Crohn’s disease symptoms can range from mild to severe. Here's a brief look at the different types of symptoms a Crohn’s patient may experience when suffering from this condition:

It’s also possible that Crohn’s can create additional complications, including:

Crohn’s is an incurable disease, but there are treatment plans that can help control the symptoms. The goals for treatment are to relieve the symptoms of bleeding, diarrhea, and pain; reduce inflammation; eliminate nutritional deficiencies; and possibly achieve and maintain remission, where you have a period of time without symptoms.

There are a variety of medications that are used to treat Crohn’s disease, including antibiotics, aminosalicylates—also known as 5-ASAs—steroids, immune modifiers, and biologic therapies. Each category of drug is used at different stages or phases of the condition, and each type has its own side effects.

Some of these drugs stop the body’s immune system from bringing about the inflammation; some are used to treat bacterial infections and the overgrowth of bacteria that can form in the small intestine. Sometimes a combination of therapies is needed or recommended, and sometimes the patient will need surgery. It’s important to work closely with your doctor to define the right plan for you.

If you or a family member suffers from Crohn’s disease and need help applying for SS benefits, the attorneys at Cuddigan Law offer experience and skill to help you get the financial support you need. Cuddigan Law also handles SS disability claims for clients who need assistance with the appeals process if their claim was denied. We want to help, so contact us by phone at (402) 933-5405, or fill out our online form.