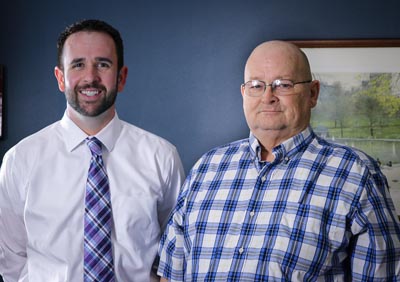 More than 90,000 “Blue Water” Navy veterans served offshore in Vietnam. Many of those sailors were exposed to the deadly herbicide brew known as Agent Orange because their ships pumped in potentially contaminated water which was used for showers and laundry and even distilled for drinking. Under the Agent Orange Act of 1991, the Blue Water vets were declared eligible for compensation, but the VA changed its ruling ten years later.

David Parker served in the U.S. Navy off the coast of Vietnam during that war in Southeast Asia. Today David is coping with severe medical issues due to Agent Orange exposure. “I have diabetes with neuropathy and ischemic heart disease which required a pacemaker implant,” David explains. “Those two conditions caused arthritis and other problems.”

After the VA turned down his claim David turned to the VFW and the American Legion for help, but they failed. After more than 12 years of fighting for his rightful benefits, David came to Cuddigan Law. “I figured the only way to get anything done was to come see the professionals,” he said. David hoped for benefits dating back to 2014, but after a two-year battle the VA awarded him benefits back dated to 2003.

Attorney Sean Cuddigan says “The VA threw a lot of obstacles in our path, but David and our team were up to the task. We, the attorneys and staff at Cuddigan Law, are proud that we are able to fight for our military men and women and get them the benefits they have earned through their service.” David put it this way in evaluating the firm’s advocacy: “On a scale of 1 to 10, you [scored] a 17. When I came to Cuddigan Law everything started clicking. They (the VA) started listening.”

For more on how this vet won his benefits and how his case hinged on the actions of a grateful Navy pilot watch David’s short video on the Cuddigan Law website.