Strategies For How You Can Be Alone & Happy 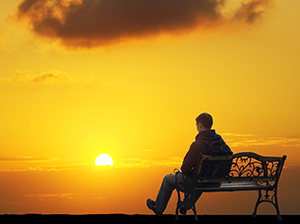 “More than three in five Americans are lonely, with more and more people reporting feeling like they are left out, poorly understood and lacking companionship,” National Public Radio reports citing a new survey from health insurer Cigna. Furthermore, despite living in a technological society that is connected like never before loneliness may be increasing.

In fact, the Cigna study found that social media may actually increase the sense of loneliness. Seventy-three percent of heavy social media users reported being lonely compared with 52% of light users.  Across the board loneliness appears to be more common among men with 63% of them saying they feel lonely compared with 58% of women. Regardless of gender, loneliness appears to be on the rise. This recent study showed a 13% increase in loneliness since Cigna first conducted this survey in 2018.

While we often think that loneliness hits seniors the hardest, the study debunks that notion. “Feelings of isolation were prevalent across generations,” reports NPR. “Gen Z — people who were 18 to 22 years old when surveyed — had the highest average loneliness score on the 80-point scale (about 50), and boomers had the lowest (about 43).”

While the report found that there are many factors that contribute to increased feelings of isolation, there is a common thread to ending loneliness: in-person connections. Doug Nemecek, chief medical officer for behavioral health at Cigna says “[s]haring…time to have a meaningful interaction and a meaningful conversation, to share our lives with others, is important to help us mitigate and minimize loneliness.”Many health professionals are calling for in-depth studies about loneliness, because how connected you feel with other not only impacts your mental health but your physical health as well.  The U.S. Health Resources and Services Administration says that loneliness and social isolation can be as damaging to your health as smoking 15 cigarettes a day. “The good news is that friendships reduce the risk of mortality or developing certain diseases and can speed recovery in those who fall ill. Moreover, simply reaching out to lonely people can jump-start the process of getting them to engage with neighbors and peers,” according to Robin Caruso of CareMore Health.

Here from goodhousekeeping.com are some additional strategies for how you can be alone and happy.

Name it. Validate it.

Telling other people you’re lonely can feel scary, shameful, and self-defeating. But expressing that feeling can be the beginning of releasing it. “We tend to stigmatize loneliness in the U.S., equating it with being a loner or a loser,” says Kory Floyd, Professor of Communication and Psychology at the University of Arizona. ‘That stigma encourages us to avoid admitting when we’re lonely. Denying our loneliness only perpetuates it, so before we can recover, we have to be honest — at least with ourselves — about what we are experiencing.”

Recognize you are not alone in feeling lonely.

If as many as 60% of Americans report feel lonely, you know that you’re sharing the same experience with millions of other people.

And recognize the kindness in others! Sometimes when you feel alone, you might feel like isolating yourself from the world, which only continues the cycle of loneliness. In that case, finding a group of friends to hang out with or dropping into a large social scene can feel like a lot. So why not consider starting small? “Go out into the world and notice a smile from the store clerk,” says Judith Orloff, MD, psychiatrist and author of  “Thriving as an Empath. “Hold a door for somebody or do something nice for a stranger and then you start to get the endorphins and the oxytocin going in your body. Oxytocin is the bonding hormone. It’s what mothers have when they give birth. So oxytocin is important.”

Give back to your community.

Along the same lines as performing an act of kindness, another way to create new, meaningful relationships can be going into your immediate community to volunteer. One of the best things to do for loneliness, experts say, is to focus on others rather than ourselves. Furthermore, volunteering may provide an easier opportunity to socialize, as you’ll be working in tandem on the task at hand. You won’t feel “on the spot” to put yourself out there and make new connections if you’re already aligned on getting something done.

Dial back on social media usage.

Since people mostly post the good things in their lives (and maybe exaggerate them) on social media it is easy to believe that everyone else has better jobs, more fun-loving friends, bigger houses, and so on. Of course this isn’t the truth, but bragging posts can drag you down. Check your social media use and ask yourself if maybe it is time to dial back your screen time.