Alcohol use disorders (AUD) are prevalent in the military and with veterans who return stateside after active duty. Additionally, binge drinking is a risk factor for AUD. In 2015, data showed that approximately one-third of service members were found to be binge drinkers, and over one-third met the criteria for AUD. Service members who are on active duty report “more substance use disorders linked to alcohol than any other drug,” and this substance abuse is also true for veterans.

Studies and Statistics on Alcohol Abuse Among Military Veterans 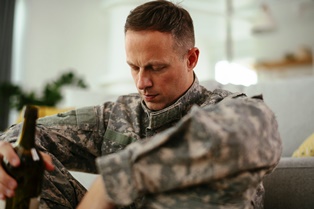 When veterans develop AUD, it's often to mask the triggers and memories of life-changing events they’ve either been involved in or witnessed during service. Alcohol becomes a coping mechanism for the physical and emotional trauma of those events.

Here are some statistics about alcohol abuse among military veterans:

Alcohol abuse among military veterans can have a severe, negative impact on active service members. Dangerous drinking patterns not only significantly affect the drinker’s personal life, professional goals and future, and wellbeing, they also impact loved ones. One such pattern is binge drinking. Approximately 23 percent of male veterans and 14 percent of female veterans reported participating in binge drinking.

At Cuddigan Law, our Nebraska VA disability lawyers understand that veterans who suffer from PTSD can face many types of other medical conditions, including alcohol use disorder. Our attorneys have supported veterans for years, and we can help you if you need VA disability benefits following a diagnosis of PTSD or any other health condition. Contact us today, and you’ll speak to an intake specialist for free.