Anyone who suffers from depression or has a friend or family member with this condition knows it can be especially overwhelming and debilitating. According to the World Health Organization (WHO), approximately 350 million people suffer from depression worldwide. The National Institute of Mental Health estimates that 16 million adults in the U.S. had at least one “major depressive episode” in 2012.

These numbers include veterans. In September 2014, approximately 2.7 million men and women came home from the Afghanistan and Iraq wars and, according to RAND, at least 20 percent of these veterans were diagnosed with PTSD and/or depression. In a study of nearly 100,000 returning veterans, 25 percent were diagnosed with a mental health condition. 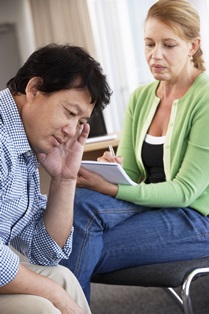 Because depression is considered a serious medical illness, the United States Department of Veterans Affairs (VA) recognizes it as a ratable condition. Not only does depression affect the victim, it also can have a negative impact on veterans’ families. Additionally, depression is linked to ongoing healthcare needs, school problems, loss of time from work, and earlier death, and the overall economic cost of this condition was estimated to be over $200 billion in 2010.

If you’re a veteran who’s been diagnosed with depression, it’s possible you could qualify for disability from the VA. Cited under Mood disorders and rated under the Psychological Rating System, major depressive disorder—also referred to as clinical depression—is called out under Code 9434.

Because filing for disability can be complicated and sometimes frustrating, it’s important to hire an experienced VA disability attorney to help with your claim.

Understanding Depression and How to Qualify for Benefits

The VA defines clinical depression as a condition “characterized by low self-esteem, lack of motivation, lack of interest in social activities, and low energy levels,” and it’s a common issue for veterans after they're discharged from service. Veterans often feel a sense of hopelessness, as well as any or all of these symptoms:

Veterans are more likely to get an approved claim when applying for VA benefits for depression if:

Connecting Your Military Service With Depression

To show that your depression is connected to your military service in some way, a doctor or professional must establish that connection. To be eligible for benefits, you need to meet these requirements:

Physical Conditions and Your VA Rating for Depression

It’s true that depression can be caused by a traumatic or stressful experience, as well as many other factors.

However, depression can also be triggered by physical injuries and conditions in veterans. Mental illness can manifest when a veteran suffers lost limbs or body parts, endures chronic pain, or faces a lack of mobility. There are a variety of conditions and illnesses linked with depression, including heart disease, diabetes, traumatic brain injuries, and sleep disorders.

There’s no easy formula for addressing veterans’ claims, especially for those suffering from depression. At Cuddigan Law, we examine each case individually, develop the best strategy, and work with you to submit your claim or file an appeal if it’s been denied.

Contact our attorneys online or give Cuddigan Law a call at 402-933-5405 to speak with someone who can help you understand the process and work with you on your VA application to increase your chances of getting an approved claim.