Am I eligible for disability if I was exposed to Agent Orange while working on a base in Thailand?

Yes. During the Vietnam War, a program called Operation Ranch Hand was developed to spray tactical defoliants on Vietnam’s plants, trees, and dense vegetation to remove cover for enemy soldiers.

Agent Orange on Bases in Thailand 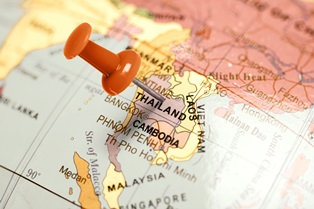 C-123 aircraft helped with Operation Ranch Hand and often landed on and departed from bases in Thailand during missions.

For military personnel who worked on these aircraft and near the Thailand storage areas, there was a high risk of exposure to Agent Orange because the equipment used to house and spray the herbicides were prone to leaking.

The United States Department of Veterans Affairs (VA) initially claimed that planes used in Operation Ranch Hand and the herbicides they carried weren't staged on Thailand bases. That position was challenged by documentation and sworn statements by military personnel, as well as by national archives detailing herbicide missions launched from Thailand.

When the Agent Orange Act of 1991 was passed, the VA acknowledged veterans who provided service on the ground. They were given “presumptive service connection” for medical conditions they suffered linked to their Agent Orange exposure.

However, prior to 2010, veterans stationed in Thailand during the Vietnam War didn't share this same presumptive connection benefit. Instead, they were required to provide evidence they suffered from a disability; the disability occurred because of an event during active duty; and there was a link between them. This additional third requirement made it more difficult for veterans stationed in Thailand to get disability benefits.

It took until 2010 for the VA to recognize that many veterans stationed in Thailand suffered from medical conditions related to their exposure to Agent Orange and deserved presumptive service connection.

You may now be eligible for disability benefits if:

If you’re a veteran once stationed on a base in Thailand, you may be eligible for VA benefits, and we can help determine if your military duty during this time qualifies you for disability benefits.

Call Cuddigan Law (402) 933 5405 to get help with your VA disability application or appeal today. Let our experienced lawyers go to work for you. Contact us to speak with an intake specialist for free.