How do I tell if I’m suffering from PTSD or combat stress? 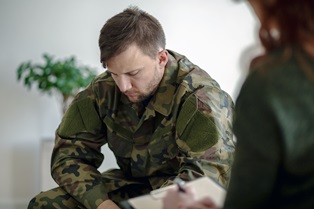 During active service, many veterans experience traumatic events. They may witness the event or live through it personally. A traumatic event can include imprisonment, death, and sexual trauma.

It can also include experiencing a moral injury—a psychological injury where a veteran behaves in a way or witnesses an event that goes against his moral code.

Each veteran responds differently to a life-changing, traumatic event. Some suffer combat stress; others suffer PTSD. If you're seeking disability benefits for PTSD from the United States Department of Veterans Affairs (VA), it's important to understand the differences between this medical condition and combat stress.

Combat stress is also referred to as combat fatigue, combat disorder, and shell shock. It's an anticipated condition that occurs as a reaction to extreme combat experiences. When veterans are placed in situations that create intense physiological and psychological stress, it's expected that most soldiers will show symptoms of combat stress, including:

PTSD isn't an immediate response to combat situations—it’s a mental condition that impairs a person’s ability to function. Combat stress is typically considered predictable and expected after a lengthy time at war, but PTSD is a severe illness. When a veteran is diagnosed with PTSD, he must experience several specific symptoms following a traumatic event, including:

There's some overlap in combat stress and PTSD symptoms, but they're not handled the same way. Combat stress isn't a medical condition that requires any treatment, and it's typically resolved after a veteran is no longer in service. PTSD, on the other hand, is a mental illness that requires a doctor’s intervention.

If you're a veteran who suffers from PTSD, you may be eligible for disability benefits from the VA. If you need help service-connecting your mental health condition and want to file for benefits or appeal a rating decision, contact Cuddigan Law. Our attorneys have supported veterans for years, and we'll carefully examine your case and advise you on the best approach for receiving the maximum in disability benefits. Call us today, and you'll speak to an intake specialist for free.