A new drug called IONIS-HTTRx is being trialed in humans that researchers believe might help in the treatment of Huntington disease (HD). After proving successful in mice and monkeys, IONIS-HTTRx is considered a treatment that could “alter the course of this devastating disease,” says Dr. Blair Leavitt of the University of British Columbia in Vancouver.

Scientists believe that IONIS-HTTRx may not only stop the disease but also reverse the damage it causes.

HD is a hereditary illness that damages the brain’s nerve cells. This fatal genetic disorder, also known as Huntington chorea and Huntington’s disease, causes these nerve cells in the caudate, putamen, and cerebral cortex to break down and ultimately, die. Once this happens, patients experience uncontrolled body movements—often beginning as small tics or twitches but eventually manifesting in an inability to walk. Additionally, HD results in cognitive and psychiatric disorders.

People diagnosed with HD often seek disability from the Social Security Administration (SSA).  Obtaining benefits from the SSA may be easier for HD than for other conditions. The SSA lists HD as a neurological disorder in section 11.17 of its Blue Book, and it includes HD in its Compassionate Allowance Program. However, it’s still important to hire an experienced Social Security (SS) disability attorney to help you file your claim.

HD is caused by a single gene mutation and in 1993, scientists isolated that gene on chromosome 4. The mutation shows excessive “repeats” in the body’s DNA called a CAG repeat. For people without the HD mutated gene, the DNA segment repeats between 10–28 times. But in patients with the HD gene, the segment repeats 36–120 times. This gene provides the code for producing a protein called “huntingtin.” And while the function of this protein isn’t clearly understood by doctors, the defective coding causes the protein to be abnormal and clump together in the brain to cause the nerve cells there to die. 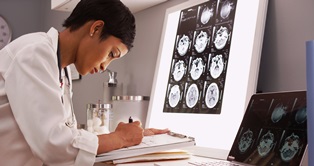 Researchers have been working on a drug that would act as a “dimmer switch” to turn down the gene in a way that it would stop producing the debilitating protein that causes the brain nerve cells to be damaged and die. After testing IONIS-HTTRx on mice with HD, within one month, the animals’ motor functions improved and the health of the mice was back to normal within two months.

When tested on monkeys, researchers found the drug decreased the mutated protein by 50 percent throughout their central nervous systems.

The drug is injected into the cerebral spinal fluid and won't cross the blood brain barrier. This barrier is a protective sheath that doesn't allow toxins to enter the brain. The IONIS-HTTRx drug was considered safe by researchers and resulted in tolerable to few side effects in the animals.

Drugs that lower the Huntingtin protein are made from molecules similar to the body’s DNA. These drugs are able to “stick strongly together” if the genetic letters match up. Drug manufacturers can create molecules with a sequence that will stick only to the messenger molecule of the huntingtin gene but no others. When the cell sees that a drug molecule is stuck to the messenger, it knows that something abnormal has happened and deletes that molecule. Ultimately, this lowers the level of the protein.

Ionis Pharmaceuticals started Phase I of a clinical trial in 2015 with participants from Germany, Canada, and England. The trial is on track to be completed in late 2017. Frank Bennett, senior vice president of research at Ionis says, “What we can say is that the trial is going well.” He adds that there have been no surprises during the trial, which is always a good sign. “It’s blissfully quiet. You don’t want surprises in clinical trials. Most surprises in safety trials are bad surprises. This one is surprise-free to date.” Phase 2 could begin in 2018.

If you have HD, it’s possible that you qualify for disability benefits from the SSA. If you were previously denied benefits for this disease, it’s important to file an appeal. Hiring an experienced SS attorney who can help you understand the process and work with you on the application is the best way to increase your chances of getting an approved claim.

Contact Cuddigan Law at (402) 933-5405  to help you get the disability support you need and deserve to address this debilitating disease.