5 Ways to Prevent Money from Ruining Your Relationship 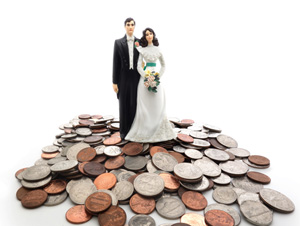 It’s hardly the best kept secret that money (and fights over money) may be the number one cause of marital discord and, sadly one of the leading causes of divorce. According to the Institute for Divorce Financial Analysis (yes, there is such an organization), money issues are responsible for nearly a quarter of all divorces, making it the third leading cause of failed marriages.  But money doesn’t have to ruin your relationship. In fact, noted financial adviser Dave Ramsey states, “You can’t have a great relationship until you can communicate and agree about money.” Here are five simple strategies you can apply to successfully tame your financial conflicts.

1. Communicate. Solid relationships that endure begin with trust and trust begins with open, honest communication. Oddly enough, even though couples these days can openly talk about some of the most sensitive subjects that would have made our ancestors blush—money still can be an awkward topic and in some cases there is complete silence on the subject.

A good place to start is by not hiding secrets. According to a poll by creditcards.com “about six million consumers in the U.S. have concealed financial accounts from spouses, partners or significant others they live with.  Nearly one in five (18 %) say they've secretly spent more than $500 without telling their spouse or partner. That kind of financial infidelity—hiding the existence of credit card, checking and savings accounts—can be just as troubling for relationships as secret romantic affairs, say credit counselors and financial experts. In fact, cheating with money damages trust and can potentially bring down the other partner's good credit name and history.”

Learn how to talk about money. “Choosing to facilitate open and honest communication around money is the most important financial decision couples can make for a successful future,” says Dr. Michael McNulty of the Chicago Relationship Center.

2. “Budget” is not a curse word.  “There’s no sexy way to say it: you need to have a household budget, says the financial magazine, Forbes. “It’s the most effective way to keep track of your money.” However a large majority of Americans do not prepare a budget.  Only about “one in three Americans prepare a detailed written or computerized household budget each month that tracks their income and expenses,” according to a Gallup poll.

“The good news is that technology has made budgeting a lot easier,” Forbes reports. “One of the most popular programs, which many financial advisors applaud, is Mint—a program that lets you create a budget and automatically track your accounts and transactions so you can see how you’re progressing. Mint also categorizes your purchases to give you a better idea of how you’re spending your money. There are a lot of other great programs as well (in addition to numerous websites that review them) so it’s worth looking into which program works best for you.” Dave Ramsey’s free EveryDollar app is a handy resource for tracking everyday expenditures on your smart phone.

3. Have an emergency fund. The only certain thing about life is that it is filled with uncertain events. You lose your job, someone in the family gets sick, the transmission of your usually reliable car blows up or any of thousands of events can set you back financially. Christianwealth.com advises that “there is a simple solution: an ‘emergency fund’. This simply means setting aside cash in a bank account for a rainy day. How much is appropriate? Whilst it will vary based on circumstances, a rough rule of thumb is six months of living expenses.”

4. Don’t maintain separate accounts. Many couples keep separate checking or credit card accounts because they are reluctant to give up the control they had as a single person. But separate accounts provoke ongoing bickering about who is paying for what and inevitably lead to resentment about what is your fair share of the expenses and what is your partner’s fair share. Separate accounts also circle back the problem we have already discussed: keeping secrets and “financial infidelity”.

5. The issues may not be about money at all. “A lot of the fights between spouses that seem as though they’re about money aren’t about [money] at all. It’s actually a clash of temperaments,” says Matt Bell, associate editor at Soundmindinvesting.com and author of the book Money and Marriage. “Temperament is a huge potential source of conflict,” he says adding, “one person may be upset that their spouse is spending too much, but the issue may not be just that they can’t afford it but may be something deeper, such as a real fear of not being able to pay their bills some day.”

While disagreements about money can still happen for any couple from time to time, if you and your partner can put into practice these five concepts, you can dramatically reduce the conflicts over money.