The Link Between TBIs and Alzheimer’s Disease

A traumatic brain injury (TBI) can be mild with symptoms that heal on their own, or it can be serious and damaging. When you suffer a violent blow to the head or to your body or an outside object pierces the skull and enters the brain, you can experience a brain injury that causes brain damage and dysfunction. The fast side-to-side motion of the brain inside the skull may lead to a mild trauma if you lose consciousness or your disorientation is less than 30 minutes. You will likely only experience temporary brain dysfunction. However, you may experience a severe brain injury if you lose consciousness for longer than 30 minutes and have memory loss longer than 24 hours. The brain may bruise, swell, or bleed, and there may be long-term complications.

Depending on the severity of the TBI, you can experience symptoms ranging from headaches, dizziness, confusion, and 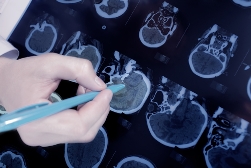 difficulties concentrating to slurred speech, problems reading and writing, blurred or partial loss of vision, and other severe impairments.

Dealing with the after effects of a TBI can be challenging, but coping with an additional condition caused by a TBI can be even more difficult. Current research has found evidence that TBIs may be linked to other conditions, including dementia—most specifically, Alzheimer’s Disease. While studies haven’t produced conclusive results about this connection, a Mayo Clinic study found evidence that Alzheimer’s starts earlier in people who have suffered a head injury at some point in their lives.

If you’ve experienced a TBI, and you now suffer from or are developing symptoms of dementia, you may be eligible for Social Security disability benefits.

What Research Says About the Link Between TBIs and Dementia

Over the past 30 years, studies continue to indicate a connection between the two conditions. Moreover, there seem to be certain types of brain injuries that may elevate the risk of developing dementia after a TBI. Particularly, if you experience a repeated head trauma—as seen by some professional athletes and combat soldiers—or your head injury involves a loss of consciousness, your risk of suffering dementia later in life increases.

One study found that seniors who suffered a moderate TBI at some point in their past had over a two times greater risk of developing Alzheimer’s compared to those older adults who had no history of a TBI. And those who experienced a severe TBI were at an over four times greater risk for dementia.

Understanding Brain Plaques and How They Factor In

Some current research on the ways TBIs change brain chemistry suggests a link between a head injury and the development of brain plaques and the abnormal proteins that have been associated with Alzheimer’s. Although it’s not clear why people who suffer TBIs are more likely to develop some type of dementia later in life, some believe that the buildup of plaques found in the brain after a TBI are similar to those seen in people who suffer from dementia. Plaques—chemically sticky proteins—form in abnormal groups or clusters called beta-amyloid. When they build up between the nerve cells, they may block the signals in the brain.

Additionally, some studies found that TBI brain plaques formed in the same areas of the brain as those who suffer dementia. These plaques are found in the posterior cingulate cortex—an area impacted in the early onset of Alzheimer’s. Additionally, the plaque buildup was greater in those whose TBIs damaged more of the brain’s white matter.

If you’ve suffered a TBI and are now living with or developing symptoms of dementia, you may be eligible for Social Security disability benefits. However, we understand that getting the right kind of help can be a challenge. At Cuddigan Law, we know the rules and restrictions that govern Social Security disability for TBIs. We know that TBI disability cases aren’t easy, but we also know it’s possible to win them. Call us at (402) 933-5405 for a free evaluation of your case.