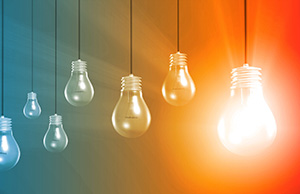 The human brain is a three-pound marvel of more than 100 billion neurons—about the same number as stars in the Milky Way galaxy. These neurons have trillions of connections called synapses that communicate everything we think, see, and do. But for all the thinking we do with our brains every minute of every day, we seldom think about our brains and how we can improve our brain health and our ability to think.

In his new book Keep Sharp: Build a Better Brain at Any Age, Dr. Sanjay Gupta says we can make our brains “better, faster, fitter, and sharper” and that it’s not that hard. Here, from Dr. Gupta and other experts, are three simple steps you can take to grow your brain power.

1. Move it or lose it. Exercise is not only good for your body, but it’s good for your brain, too. “Across the board, exercise increases brain function, memory retention, and other key areas of cognition up to 20 percent,” according to Dr. Arthur Kramer, a neuroscientist at the University of Illinois at Urbana-Champaign, as reported by Life Experience magazine.

Dr. Gupta, says “The connection between physical fitness and brain fitness is clear, direct, and powerful.” If you already exercise regularly, he says, try something different. For example, if you swim, try jogging or cycling.

2. Feed your brain, but do it right. Research has clearly shown that you can boost brain performance and stave off brain decline by eating certain foods and limiting others.

Life Experience magazine encourages people to eat good fats which “are premium gas for the brain. Any source of omega-3 fats, such as walnuts, flaxseeds, flaxseed oil, or dark, leafy greens, will help your brain run smoothly. But fish provide the brain with its favorite fat, docosahexaenoic acid (DHA) – which accounts for roughly half of its overall fat content. A June 2006 study published in the American Journal of Clinical Nutrition bears that out: People who ate an average of 2.7 servings of fish a week reduced their risk of suffering from Alzheimer’s disease and other dementias —illnesses that result in brain function decline in 4.5 million Americans—by roughly 50 percent.”

“Per gram of tissue, the brain produces more free radicals—highly reactive molecules that can contribute to cell damage, especially in the brain’s delicate fat tissue—than any other organ,” Life Experience magazine reports. “Some scientists suspect damage from free radicals is one of the biggest culprits in the memory loss associated with aging.

Luckily, antioxidants are the brain’s cleanup crew. Found primarily in fruits and vegetables, antioxidants work around the clock to scrub the body clean of free radicals. Numerous studies show that people who eat the most fruits and veggies throughout life are less likely to suffer from dementia later on.” And here’s some delicious news: other foods that are rich in antioxidants include dark chocolate, pecans, strawberries, raspberries, and blueberries.

Because we often “mistake hunger for thirst”, Gupta recommends that between meals we drink a glass of water instead of reaching for a snack. Not only does the water fill you up and take the place of junk calories, it rehydrates your brain—an important component in boosting your brain power.

3. You snooze, you win. “Scores of well-designed studies ...routinely show that poor sleep can lead to impaired memory and that chronic stress can impair your ability to learn and adapt to new situations,” says Gupta. Do your brain a favor and give it a break with time to rest and sleep—at least seven hours of sleep every night, “the bare minimum if you want to have normal, healthy functioning physiology from your brain on down.”