Are Organic Foods Safer? Better for You? 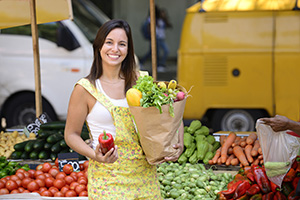 Perhaps you’ve had this experience: You are standing in the produce section of your grocery store with an apple in each hand. Both are red, shiny, and perfectly formed. However, one has a sticker saying that it is “USDA Organic” and the other doesn’t. Is the organic apple safer to eat? Is it better for you? And does that “USDA Organic” sticker even mean much?

To earn an organic seal, the U.S. Department of Agriculture (USDA) has a certification process that requires the foods meet strict government standards. These standards regulate how such foods are grown, handled, and processed. Basically organic fruits, vegetables, and grains cannot be grown using synthetic fertilizers, genetic engineering, or irradiation to increase shelf life or to eliminate disease or pests. As you would expect, most synthetic pesticides are also prohibited. For meat products to qualify as organic, livestock cannot have been given antibiotics or growth hormones. Animals must be raised in living conditions accommodating their natural behaviors (like the ability to graze on pasture), and fed 100% organic feed and forage.

The principal downside to organic foods is their cost. As for the upside, the Mayo Clinic says “there is a growing body of evidence that shows some potential health benefits of organic foods when compared with conventionally grown foods. While these studies have shown differences in the food, there is limited information to draw conclusions about how these differences translate into overall health benefits.

Potential benefits include the following:

Advocates for organic foods also maintain that organic farming is better for the environment. The Columbia (University) Climate School argues that “[o]rganic farming is widely considered to be a far more sustainable alternative when it comes to food production. The lack of pesticides and wider variety of plants enhances biodiversity and results in better soil quality and reduced pollution from fertilizer or pesticide run-off.” The USDA adds that organic farming practices “[r]educe the risks of human, animal, and environmental exposure to toxic materials.”

So the bottom line on the choice between organic and non-organic foods is like so many other life decisions: there are tradeoffs. Organic food is somewhat safer, somewhat more nutritious and better for the environment. Is it worth the higher cost? That is a decision you will have to make when you’re holding those two apples.